I had the pleasure of hosting another conversation with Andrew Weatherall, this time at Festival Number 6. There was a sizeable crowd to see him, and there were laughs from the off – and some good heckling from a Glaswegian Love From Outer Space regular. Weatherall is always impressive and I could probably write reams and reams about why he’s so influential, but instead, I’d just like to leave you with a tiny nugget, right from the end of the session. We’d been talking about his BBC6Music radio shows, and specifically, the one where he played the music that made Screamadelica, a show that featured tunes from Can, ACR, Prince Far I and Isaac Hayes. What, I asked, might be on a show that explained the music that makes him right now?

I’m paraphrasing but the answer is perfect, because it explains why he’s still as relevant now as he was when he and his pals started Boys Own back in the late ’80s. “I value authenticity over originality.”

Or to put it another way, come as you are.

You can see my interview with him at last year’s RBMA here.

When I say I DJed at Marsha Smith’s 7’s Unda The Stairz night last week, I do so with single quotation marks in the air and with the humble reservation that DJing is a noble art and that the most I can hope to say is that I can select alright. 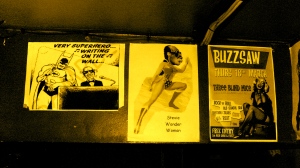 Lets just say me and the faders need to spend some more time together. I really enjoyed it (apart from the silence when I crossfaded the wrong way) and it was a chance to pull out some of my favourite 7″s. Although I did end up in a bashment cul-de-sac after playing Turbulence’s ‘Notorious’ a little too early. Madlib’s Beat Conductor 7″ EP came in very useful, although I didn’t get to play Furniture’s amazingly brilliant 1986 pop hit ‘Brilliant Mind’. That’ll have to be another time. Ms Smith played a lot of lovely soul records (and some Oran Juice Jones) and Hugo Mendez, a proper DJ, went deep and tropical. More info on what’s shaping up to be a proper London night here.

The show went out on Friday, 8-10pm, with an interview with grime MC Trim, a London Belongs To Me with Eglo singer Fatima, and a live set from Major Lazer recorded at Carnival a few weeks ago. Still trying to sort Listen Again issues, but hoping to have something sorted soon. In the meantime, here’s the tunes and some Youtube links. Next weeks show will have Jah Wobble plus new music from VHS Head, Cooly G and Badness.

NME Radio Show… back on air

My Pick N Mix show went out on Friday night, after a few months off air. Here’s what I played, with a few Youtube links hyperlinked in case you’re interested in how it sounds, because there’s nothing more annoying than getting a list of music you can’t listen to.

The shows should eventually be hosted for listen back on redbullstudios.com…. but not just yet. Next week’s show is 8-10pm, Friday night, on NME’s DAB station or on nme.com/radio. Plus there’s a new app.

Twin Sister ‘All Around And Away We Go’ (Domino)

I’m recording a guest spot on the Guardian’s Music Weekly Podcast tomorrow, with Dan Hancox and Rosie Swash. So I’ve spent the whole morning trying to work out what the heck to take along as my singles club choice. In fact, I spent a fair few hours over the last few days pondering this, because all the music I like sounds quite different out of context and all by itself. Pop records can easily stand alone and you don’t need anything else before or after to make it make sense; it’s self-sustaining. But an amazing techno mix of a drum ‘n’ bass tune; or a bare-to-the-bones juke track (that’s also unspeakably filthy), or a new bit from a grime producer’s new free-to-download album just sounds a bit strange out there by itself, surrounded by conversation. And it didn’t help not to have any electricity for most of the morning. Out to Alan and Pat the electricians, sorting out my heaters.