I’m doing this talk at Rough Trade East in a couple of weeks on fanzines from pre-punk til the modern day. Andrew Weatherall, Bob Stanley, Geoff Travis and Andy Childs will be taking part, talking about the part they played in DIY world, whether it was ‘60s rock ‘zine Zig Zag or acid house irregular Boy’s Own. 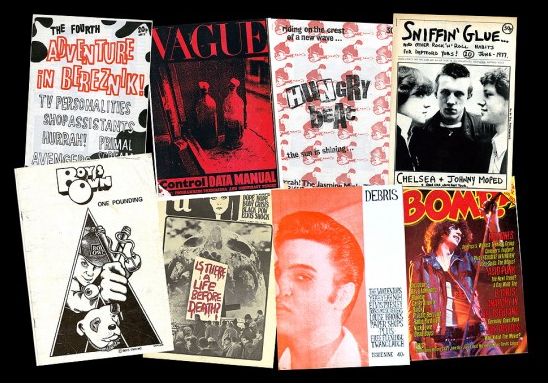 Getting ready for a session like this requires some proper research, so I’ve been reading books (the Boy’s Own and Soul Underground anthologies amongst others) and I’ve been keeping my eye out for current examples of the fanzine imperative, something Caught By The River’s Robin Turner called “an ever-present and excitable urgency to pass on newly learnt information to as many people as possible.”

This is precisely what I found in a gorgeous sun-bleached surf fanzine called Kook, which I came across in The Ship, a delightfully grown-up men’s clothes shop-stroke-vintage skate ‘n’ surf treasure trove in Greenwich Market.

I haven’t got a ruler to hand but it looks like a slightly slim-line Berliner, filled with beautiful photography, illustration, neat design touches (the lines and dots, dominos and cross-hatching that appear subtly throughout). Even better, the words are wonderful. I particularly enjoyed Rui’s article on how surf-board shaping has become popular in Portugal, Cyrus Sutton’s article on creating surf experiences in the street with a 50ft piece of tarpaulin, and Rebecca Jane Olive’s piece on how the idea that surfing and freedom are linked isn’t always right: “When I choose to take some time away from surfing, it sits on my shoulder whispering in my ear, nagging me, asking questions and making demands… At times I think we’ve all been fooled. Surfing isn’t freedom, it’s a trap.” 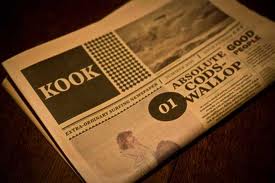 Kook is entirely propelled by the fanzine impulse. On the back, in the box titled ‘Kook Needs You!’ (people who do fanzines always want to reach out to like-minded folk) they say it quite explicitly. “Kook is created and produced for the shared joy of creating and producing something different. It is not for profit. If you would like to submit content for Kook 3, please get in touch.”

I found another piece of DIY publishing recently. It’s not exactly a fanzine, more a cross between treatise and graphic novel, but hey, who’s checking? It was about the size of my hand (properly pocket-sized), bound in blue blotting paper and contained a cod-scientific argument against spending too much time on the internet. It was called Social Notworking and the final page contained a 2nd Class stamp and an exhortation to go and write to someone. I would post a picture, but I leant it to my friend and I can’t find anything about it online.

I’ve never been convinced by the argument that blogs have taken over from fanzines, especially as so many blogs are transparently CV-angled. There are blogs that are propelled by the fanzine imperative (Paul Byrne’s testpressing.org and Matthew Hamilton’s AOR Disco come to mind) but I’ve never bought into any idea that suggests that a new technology (blogs) will destroy an old one (print). Video didn’t kill cinema. On-line shopping didn’t kill physical retail. All that happens is a constant realigning of everything, all the time.

The best way to describe Port Eliot festival is like a huge, parallel universe Garden Fete.

It has the attributes of a rural summer fair (village ladies selling jam outside a chapel; bunting; people larking about in the river) but with these stock elements teased and twisted into a strange, funny and frequently quite feral experience.

I think my favourite half an hour of Port Eliot 2011 was when I was walking through the woods towards the river with my friends Chris and Diana. It’s a lovely view anyway, with the river either glassy with water or flat brown with mud depending on the tide, and a host of yellow and brown hills rising up behind and folding into each other.

It looked even better than usual because there were two shire horses leading a red and blue wooden cart, which had twelve men and women playing violins and pipes and drums, dressed as bus conductors, with big MOT discs as badges. I had no idea what the music was, but it felt like the kind of English jig that sent village fairs a bit mental in Thomas Hardy’s time and led to young folk being scolded by their parents. I swear, if these lot had come to my village in 1823, I’d have hopped on the back and begged them to take me with them, whether I was 15 or 59. The cart rolled along the length of the river path and then it was gone. I saw them again later, in a tent they’d named the Busk Stop.

The river sits at the bottom of the site, with a Isambard Kingdom Brunel viaduct spanning it over to the far right of the estate. It’s a kind of visual full-stop to the festival, an edge where you’d expect strange and interesting things to happen. At one end of the river there was the Cinema Paradiso, where they screened The Red Shoes and Great Expectations and where mozzies congregated. At the other end, before you headed back towards the house, was the Idler Academy where people were building coracles. In-between the two was the brilliant Caught By The River where Jeff Barrett and Robin Turner conjured up another year of musings and music that created a Venn diagram intersecting fishing, Sabresonic, hillbilly beards, cycling around England, bird sound DJ sets, fanzines and a 22-strong alt-indie girl group who sound like a fem-powerful version of the Polyphonic Spree, in ribbons.

I’ve been to Port Eliot three times now, but this was the first time I went as a performer. My job was to host a conversation about the underground press and the pre-punk fanzines that laid the foundations for influential zines like Sniffin’ Glue. I’d met up with the gentlemen of the panel a month or so beforehand to talk about what we’d talk about. I went up to the Heavenly offices in Portobello Rd and met Geoff Travis, who needs no introduction apart from the two words Rough and Trade; Andy Childs, who started his own underground rock fanzine Fat Angel and went on to edit Zig Zag; and Mick Houghton, who wrote the definitive book about Elektra and who ran his own Captain Beefheart-inspired fanzine, Fast and Bulbous, before embarking on a life-long journey in music as a journalist and publicist for people including Echo and The Bunnymen, Bill Drummond and Spiritualized. We sat around a big table and they told me stories. I learnt a lot, and I came away with a big fat pile of original fanzines that had been sitting in Andy Childs’ shed.

Reading these was instructive. You realise how much is left out of history, and how inaccurate received wisdom can be. The punk fanzines Childs lent me were brilliant but they weren’t cartoony punk. Chainsaw had an interview with Wire, conducted at the Red Deer, Croydon, which included this exchange:

Charlie Chainsaw: Do you want to make a lot of money out of your music?
Colin: Fuck that no. We’re not in it for the money.
Charlie Chainsaw: Well, Slaughter and The Dogs said they wanted to make a lot of money and any group that said they weren’t in it for the money were bloody liars.
Colin: Well fuck them. They’re Slaughter and The Dogs and they’re fucking wankers.

At the end, Charlie writes this brilliant line. ‘This is the interview. It’s by no means verbatim, but it’s the best I can remember through my alcoholic haze’. The DIY idea, written explicitly in the editor’s letter of Glasgow fanzine Ripped And Torn, was clearly true and believable to kids at the time. “Anyone can do this,” Tony D wrote in a green edition of his fanzine. “None of us have any training or special equipment. If you want to, you can do it too.”

We sat on stage and talked about the underground press. Geoff Travis, a man who pretty much defines the word ‘concise’, talked about Oz being sold outside his school gates. Andy Childs talked about taking his first editions of Fat Angel to the first Virgin Records store, above a shoe shop on Oxford St, and Mick Haughton talked about making zines simply because you wanted to – that the only impulse that mattered was the desire to do it, and to share the music you loved with other people, people you knew had to be out there.

It was great. Well, I enjoyed it anyway and it was a privilege to be able to share my small experiences of that impulse too. When Johnno and Paul started Jockey Slut in Manchester, and asked myself and Joanne Wain to be part of it, we were doing the same thing. We made the mag because no-one else was writing about house or techno in the way we wanted to read it. We wanted to share what we loved and we knew there must be people like us out there. Our world wasn’t properly covered in NME or Melody Maker, apart from ghettoised ‘dance’ pages, and dance music mags only seemed bothered about recurrent drugs features. We cared about Detroit techno artists like Underground Resistance, or New York house artists like Masters At Work and we wanted to be irreverent and funny. I’d never seen a copy of Sniffin Glue but I knew it had existed and the mag tagline ‘disco pogo for punks in pumps’ was an overt nod to our fanzine lineage. It’s something the influential acid house fanzine did too: Boys Own was punk in a million small ways and in one obvious way. In a nod to the possibly apocryphal Sniffin Glue article which printed three chords and told readers to go and form a band, Boys Own ran a piece which pictured a sampler, a drum machine and two decks, and told readers to go and make a record.

But anyway. I’m home now, and Port Eliot is over for another year. One thing I thought on the way home, and I think it’s also true of all experientially-rich events like it, is that there’s a shared experience and an entirely individual experience. I had a very different time to the people who hung out in the fashion area, and caroused with designers and baked hats. They had a different time to the people who milled around the flower displays and followed a naturalists thread, listening to experts talking about butterflies, or holding up machines that let you hear bats talking to each other. We were all there over the weekend, but we were also in different places.

I’m not suggest that anyone needs to go to Port Eliot next year. These things have a life and a lifespan and every edition of the festival will be different. Once it was the Elephant Fayre, and in the future it might well be something different. The point really, is that it’s entirely possible for everyone to create something special and beautiful if you put your mind to it. The St Germans family have a bigger and more beautiful canvas than most, but the idea remains the same, whether you’re inviting your friends round for an outdoor screening of a Werner Hertzog film in your yard, or if you’re turning a BBQ into an art event like my friend Al did earlier this summer. But then he also build a shed from doors he found in skips, so he’s living in that mindset already.

Right now. I’m off to find out more about Busk Stop.