The Art Party Conference was always going to be a lot of fun, not least because of the delightfully irreverent call for attendees to create portraits of Michael Gove. These were the best-looking protest banners I’ve ever seen, a colourful exercise in the democratic right to say what you think humorously, and often very beautifully. Most were funny, some were a bit mean, but they all conveyed artists and art practitioners’ righteous anger at the downgrading of the arts in education – and the impact this will have ongoing. 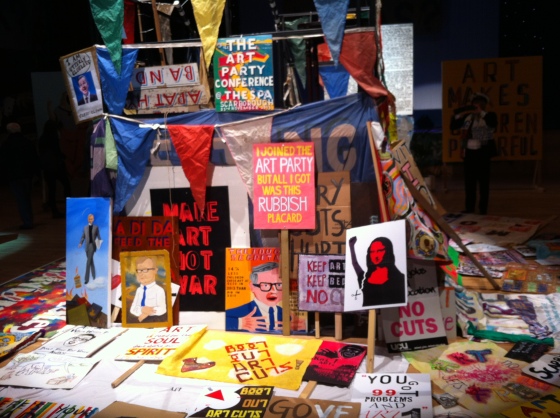 The day-long event at the Spa Centre, Scarborough was organised by artist Bob and Roberta Smith, whose outsized flags you might have seen on the Southbank over the summer. He was so outraged by the impact of Michael Gove’s educational reforms on the arts that he made a painting called Letter To Michael Gove. This became a singularity which, when expanded, became The Art Party Conference: a gathering of art teachers, kids, curious locals and artists including Jeremy Deller, Cornelia Parker and Richard Wentworth for a day of curious actions on the north eastern coast of England.

In a room looking onto the steel-grey sea there was an impromptu opportunity to do life drawing of surfers with easels and paper already in place. Around the corner, there was a Michael Gove lookalike in a bad suit, pushing his way irritatedly through the crowds at the Goveshy where crowds lined up to chuck stuff at the (beautiful, hand-crafted) plaster busts of the Secretary Of State For Education. Up the stairs, nestled in a corner was a nail bar where you could have images of iconic female artists applied to your nails and where the real art was in the conversation that the artist was curating between nail technician and recipient. There were all kinds of transactions going on and very few involved handing over cash. You paid your fiver entrance and everything was free, bar the normal commercial transactions of tea and bowls of chips that reminded you that we were indeed at a conference centre. Plates of home-made chewy cookies and lollipops were freely available on artists stands, alongside beautifully-printer A2 posters from Pavel Büchler, Ian Bourne and Bobby Baker. We were citizens in the free state of the Art Party and it felt like a participatory version of Carry On Up The Situationists.

It was also neatly democratic. We went up to see what was happening with Roger Clarke’s Record Player Orchestra and ended up doing our own performance which involved choosing a tone on a record and playing it whenever you wanted along with nine other people doing the same thing. It was strangely comforting, the hum of electricity and the drone sending us all into somnambulance. This also led to another discovery: spending an hour playing pure frequency makes your eyeballs buzz. 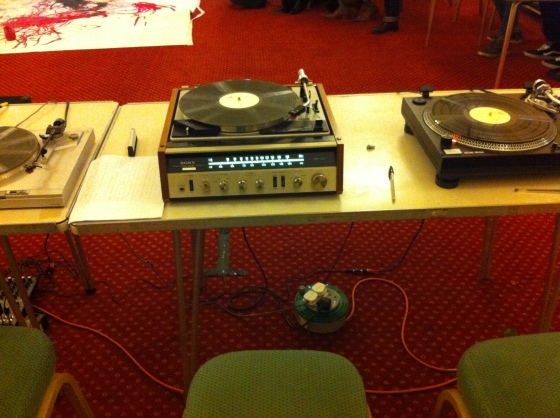 And finally, we stumbled upon curator Lynda Morris’s talk, titled Drinking With Gilbert and George. This was a real highlight and could be compressed into ‘we got drunk/ we made art’. She finished her talk with a hearty ‘cheers!’ and played out the pair’s singing sculpture, which became our theme tune as we wended a happy way back the Travelodge, which like everything else, now looked like a piece of art.