‘A girl who is beautiful inside and out’

We’re half way through our week-long collaboration with the girls of Ni Nyampinga. The magazine and radio show might only be two years old but it’s already famous in Rwanda. The degree to which Ni Nyampinga is a household name became clear when we went to visit Marie Adelaide school in Gihara, just east of Kigali. We’d gone to get content for the two features and two radio packages that we are making during our week here, and specifically, we’d gone to find content for a story about how new Rwandan music by artists like Knowless and King James were bringing young people together in friendship.

When we arrived, the whole school was lined up for an al fresco assembly in the yard.

Ni Nyampinga girls Cecile, 22, Beni, 19,  Glorious, 24 and Christine, 15 took to the stage and were greeted with cheers and whistles. The story required an interview with a musician so they asked the students if there were any musicians among them. Two candidates were quickly pushed to the front: a rapper and a very shy girl who was described as a gospel singer. The former is already a school star and his peers were enthusiastic in singing back the chorus to his track. The girl performed a version of Rwandan teen favourite Knowless’ song Nzabampari and everyone responded, soft voices dropping then rising, like a Rwandan village version of Donny Hathaway Live In New York.

It was a vibrant welcome for the team who have become slightly famous themselves. Girls and boys throughout the country read the articles in the quarterly magazine, now on issue 7, and hear them weekly on their live radio show which has been running for two years.  The magazine is designed to be shared (“not kept in one person’s bag”, says Girl Co-ordinator Pacifique) but still it’s at a premium: the head teacher of the school, a softly-spoken lady who radiated a quiet authority, explained that the magazine is so popular they have to ration it, and only students who are processing well get their hands on the new issue.

Celeste and Keisha took their team off to a youth club south of Kigali to make a story about that perennial question – whether boys and girls can ever really just be friends – and had their own adventures. Back in the office, we collected all the audio, pictures and notes we’d made from our various excursions and finished for the day, dusty, tired, but pretty sure we had the seeds of some very good stories. 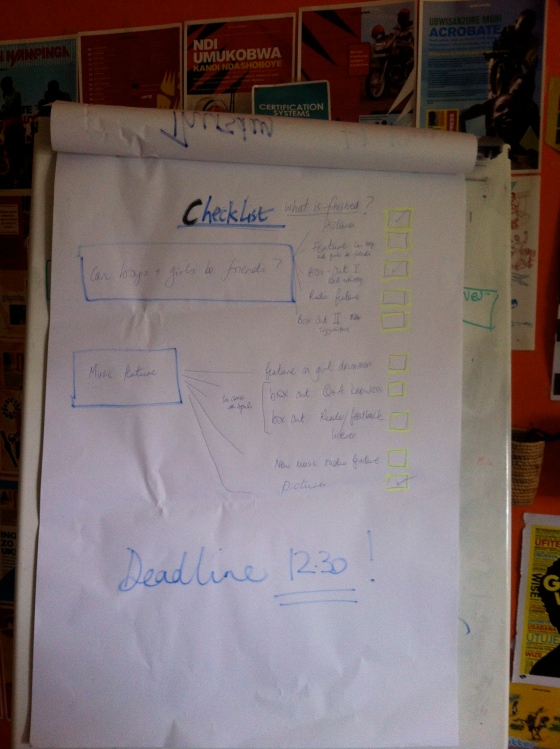 And in case you’re wondering, Ni Nyampinga is a Rwandan concept which describes a girl who is beautiful inside and out. A Nyampinga is confident and happy, she makes good decisions, and she knows she is valued because of who she is.

It’s a concept we think might just be useful back in the UK, too.